Excited as usual to join the trekking teak heading to Kabbaladurga.  Kabbaladurga is another monolith near Bangalore located about 80 kms away.

Initially we planned to go with 15 member team from Bangalore Trekking Club which scaled to 22 and finally when i got the news it was 35 member team with 2 cars and 2 Tempo Travellers which set out on the journey towards Kanakapura ( 50 Kms) from Bangalore.

Our first stop was the Harohalli lake next to bus stand ( 36 Kms) , which is the home for lovely Lotus flowers.   Once this lake was bedecked with lotus flowers, now one can see sizable flowers 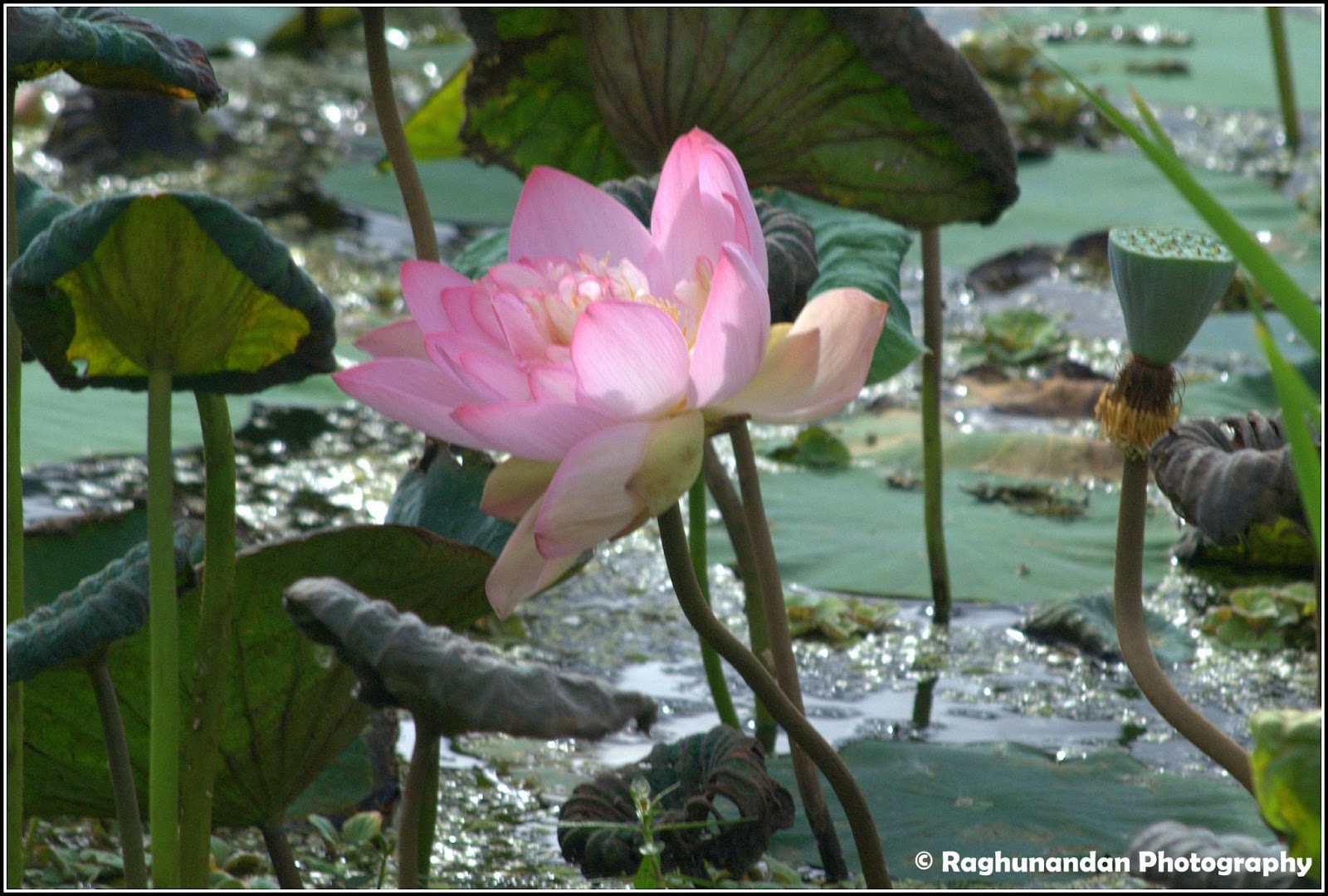 The peak is home to the temple of goddess Kabbalamma and had derived its name from the temple and the ruins of a fort at the peak. It is green, rocky and serene making it an ideal weekend getaway. The view from the top is absolutely breath-taking and perfect for trekkers and climbing enthusiasts. The climb is as difficult as you want it to be. You may take the regular path or just dash up head-on. 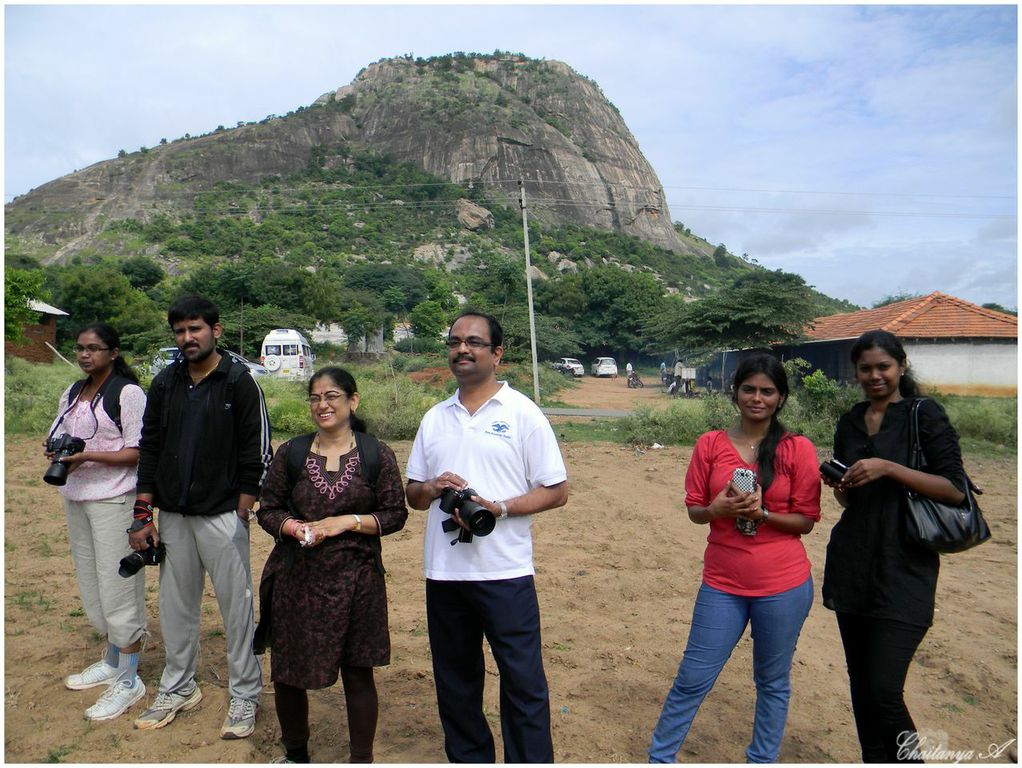 Our team was enthusiastic and we had a team huddle and distribution of lunch packets, we started scaling the peaks.    We were welcomed by the granite rocks, which is being leased for granite business and we could also hear the dynamite blasts  from near by hillocks.  Hope Kabbaladurga will not face threat from landsharks.

We started scaling the hillock slowly and enjoyed every bit of nature and the greenery. We came across different wild flowers, insects, butterflies on our way and it was fun scaling.    It was a unforgettable experience . 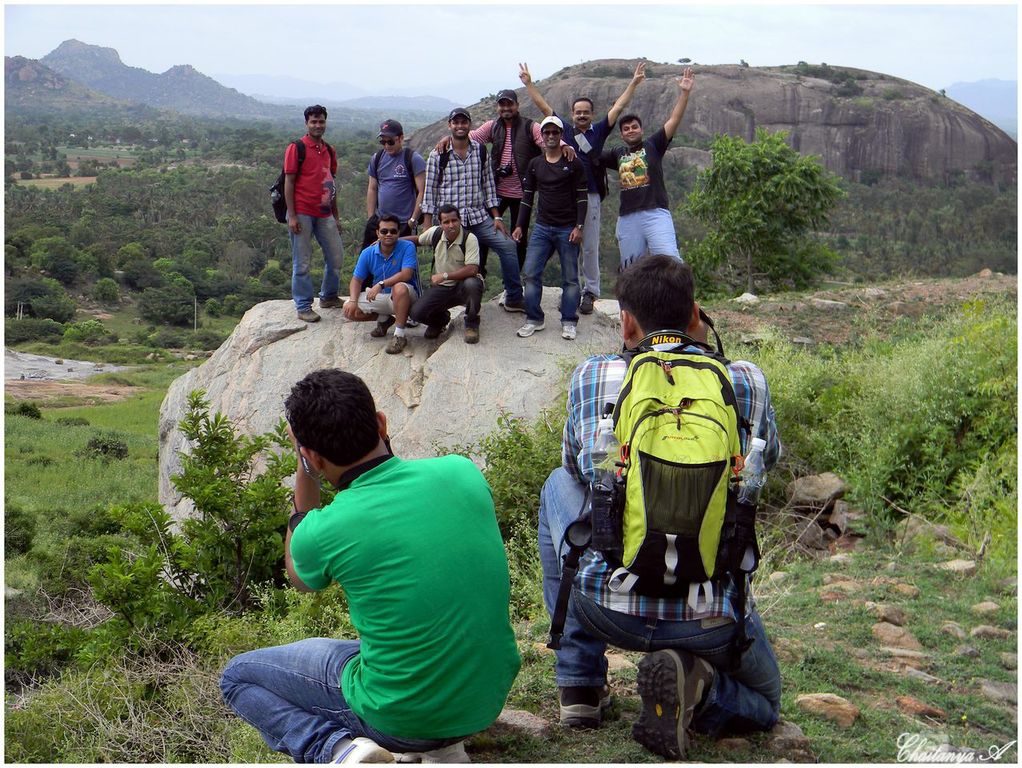 We had 8 of them who were trekking for the first time  and 16 moderate trekkers  and rest were seasoned trekkers in the team.   We took breaks at good intervals enjoying the nature and it was time for photographers to click the team and made it a memorable event.   It was an experience of life time as we were welcomed by slippery rocks to wet lands and greenery every where.   At times it was very narrow path and navigated it 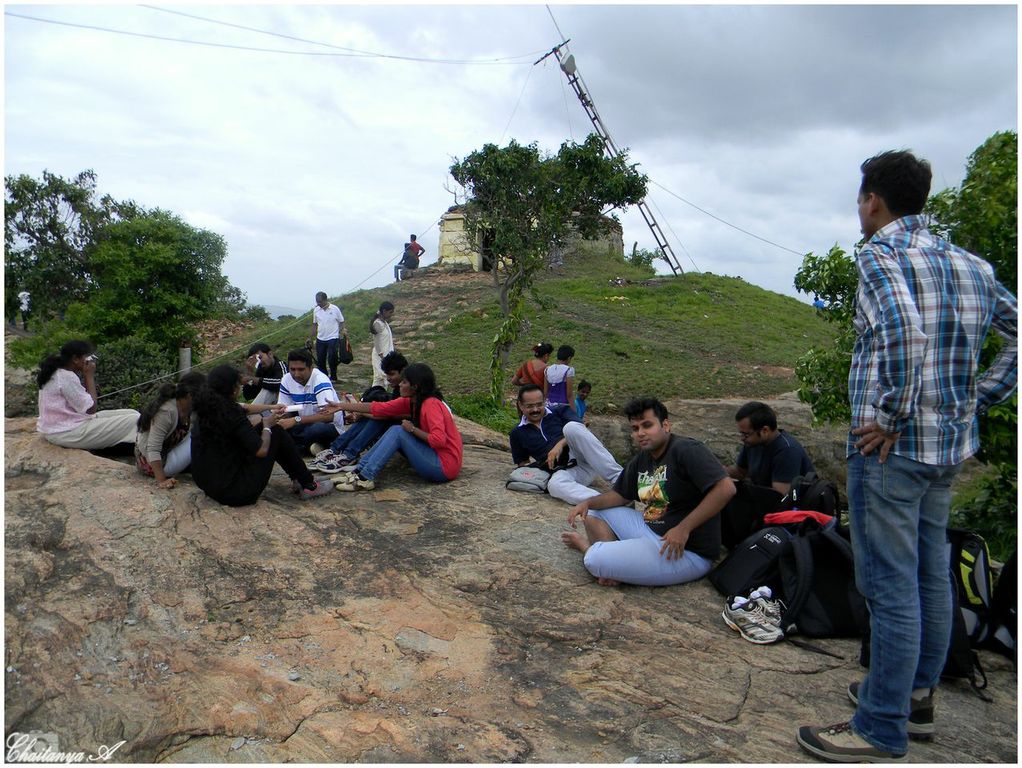 After 2.5 hours of trek, we reached the destination finally, abode of Kabbalamma.     We were welcomed by a tiny temple at the top of the peak which will be usually open by 7 - 10 AM and once again 3.30 - 5.30 PM.    We could notice that due to ghasty wind, the power lines were snapped and recent rains had brought down the electric pole.

On the top of the hill, we also noticed a ritual where stone pebbles are collected and placed atop of each other to suggest that we had visited the Kabalamma temple.   There is a saying that Goddess Kabalamma would listen to the vows of her disciples and would accord justice within few days of visit to her abode. 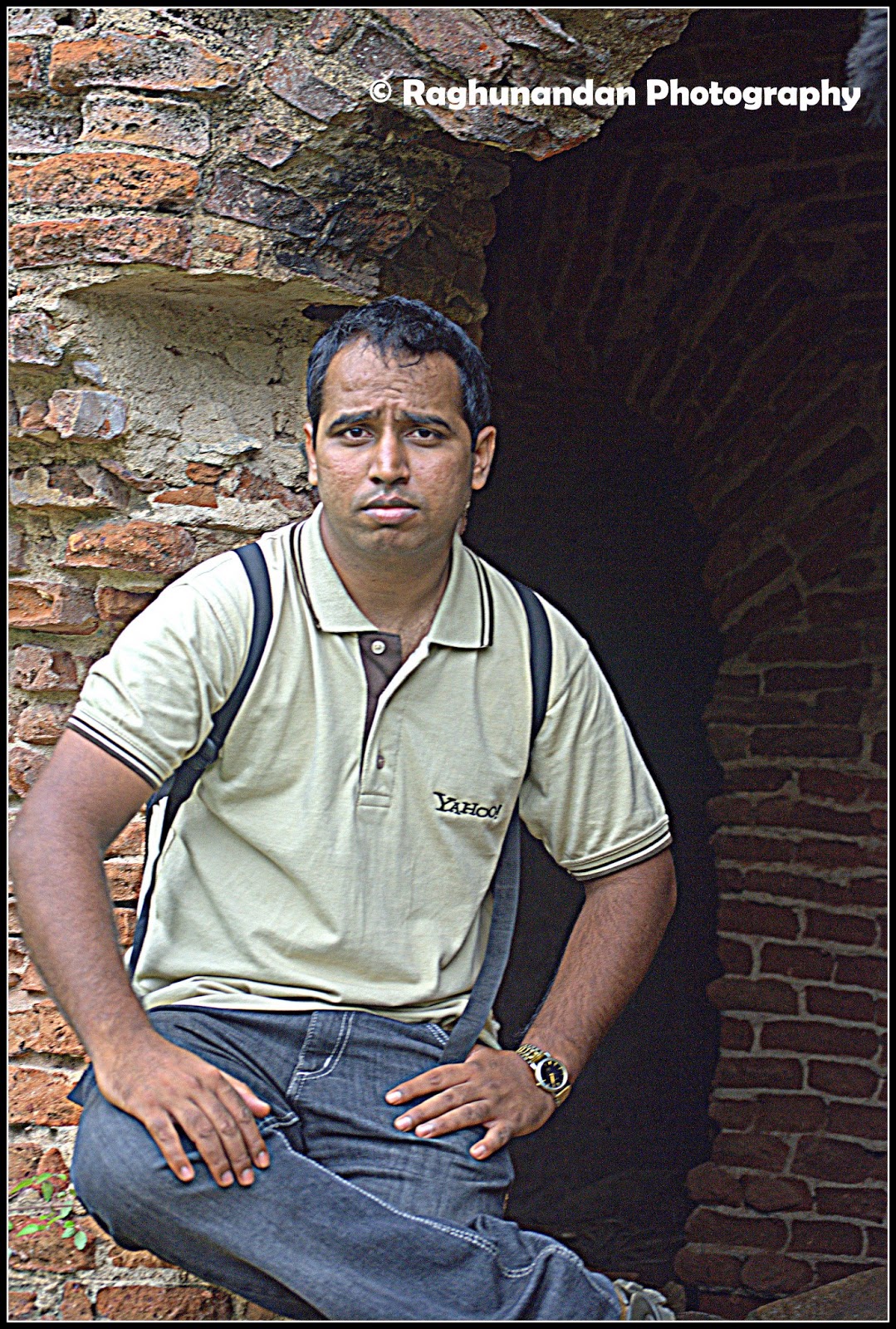 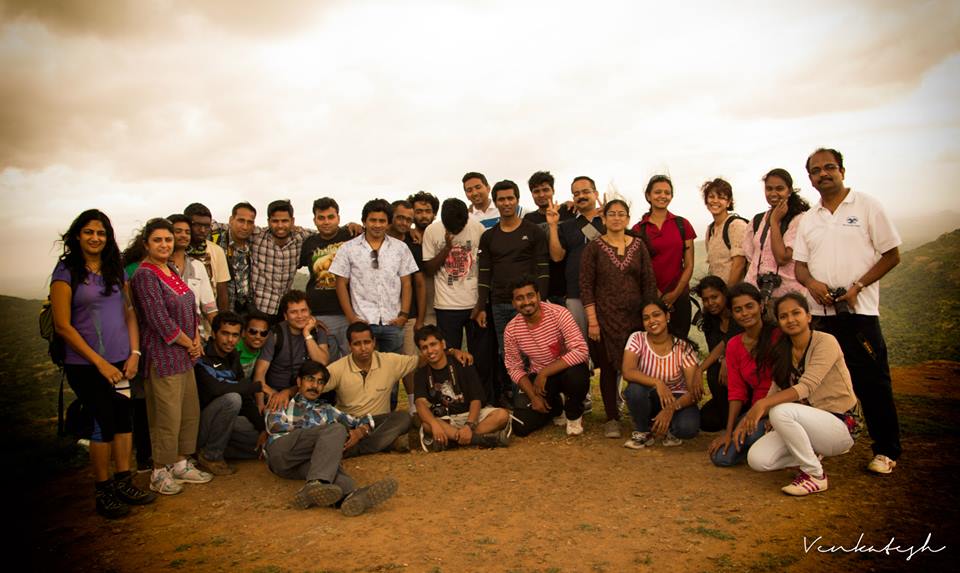 Our TGiS team had good session of taking portraits of fellow trekkers and we had gala time in the midst of nature capturing the events.   We also celebrated the birthday of one of the team members in BTC - Channa who was eventually asked to carry the birthday cake to the top.     Finally we celebrated his birthday in style by cutting the cake on the top of the hill.    Team finished their lunch and headed to the other corner of the plateau which attracted strong breeze.    It was breathtaking view from the top and could witness the nature's beauty.   We were surrounded by hillocks and it was a feast to our eyes. We spotted a old building constructed below the temple, looked like it was an armory depot, now in shambles surrounded by trees and bushes.   This was one of our spots for the portraits. 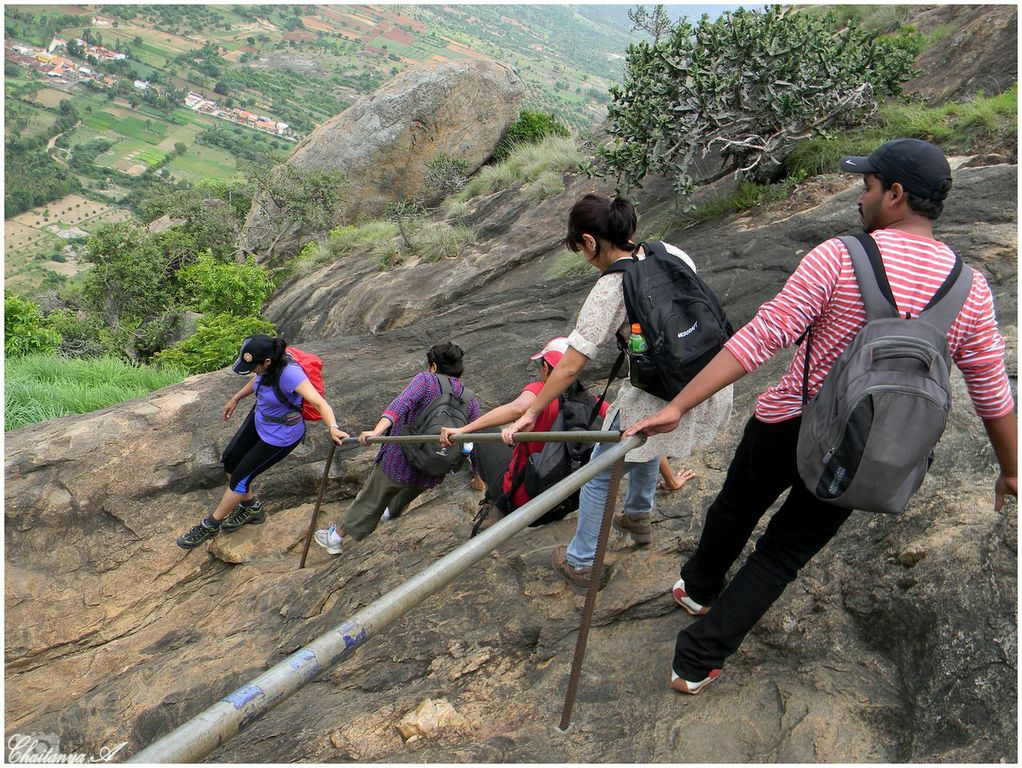 Harish, Arun Jose were our models and took some amazing shots there.   Finally the team assembled at the tip of the hillock where we had our photo session and spent couple of minutes enjoying the serenity.   Thanks to Venkatesh and Channa for capturing the team.      Descending from the hillock was a herculean task  as it did not seem easy to get down.    Team assisted every one to climb down easily and had to remove the shoes and get down as it was slippery at times injuring the feet.     Finally we climbed down after 2.5 hour trek and joined the team.     We were the last to join the team and Chaitanya had a tuff task to control them.    Finally he had to give us the call and found out that we were close by.

We shared our experiences and suggestions before we could get back to the vehicles.     We took a chai break once again at Kanakapura before departing to Bangalore.     Overall it was a very memorable trek and kudos to each member of the team, especially to Chaitanya and Meghraj for organizing such a eventful trek.    Had a beautiful drive back home from Kanakapura.     Look forward to yet another memorable trek  in the coming days.

Posted by svraghunandan at 02:02 No comments: